I was not compensated in any way for this post. All opinions expressed are mine. Or of my guests. 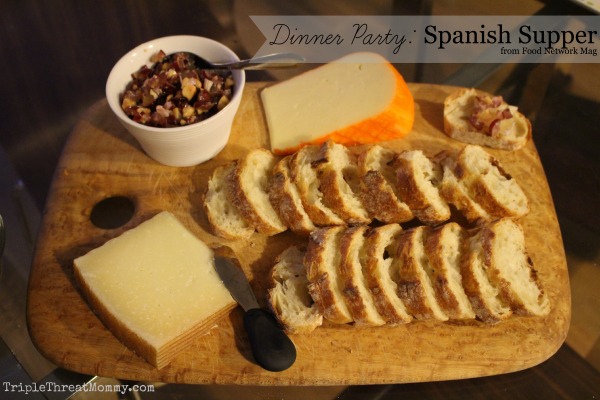 Since I have a subscription to Food Network Magazine, it is always my source for inspiration. I always head to their “Weekend Cooking” section, and if the menu seems easy, ingredient list short, then I’ve got a winner. This month, I  was drooling over the Spanish Supper menu which had Grilled Swordfish, Potato-Chorizo Salad, a Spanish Cheese Plate with Grape Tapenade, and a Gazpacho with Cilantro Oil (I decided to skip this one). I added a Lemon-Herb Orzo which was featured in their “Weeknight Cooking Easy Sides” section. Below are the recipes that I used, with some of my editorial comments with an * and italics. 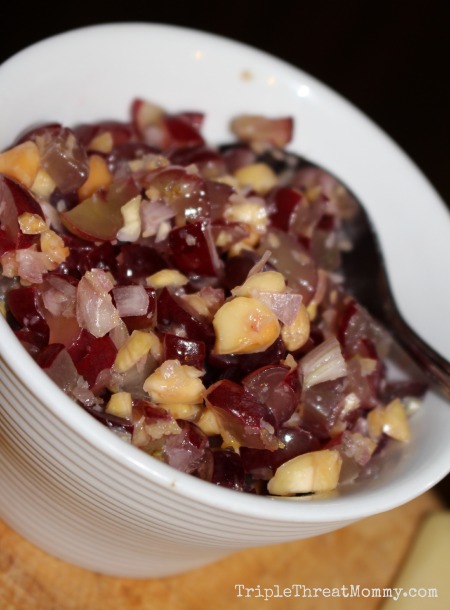 Ingredients: Chop up 1 cup finely chopped grapes, 2 tablespoons of chopped toasted marcona almonds [*note, I did not toast them, and they turned out DELICIOUS], 1 tablespoon minced shallots, the juice of 1/2 lemon and 1 teaspoon honey. Let it sit for at least 30 minutes, and give it a good mix before serving. Serve with Mahon and Manchego cheeses with sliced baguette.

Just a warning: double the recipe. This was so good, and it went so fast. I should have made more.

Protein: Swordfish. This is the only part of the meal that I did not photograph, because as soon as it was cooked, we sat down to eating! Next time!

Directions
Prepare the fish: Whisk the garlic, olive oil, orange juice, vinegar, honey, thyme, cumin seeds, 1/2 teaspoon salt and a few grinds of pepper in a large bowl. Add the fish and turn to coat. Cover with plastic wrap and refrigerate 1 hour. Preheat a grill to high; brush the grates lightly with vegetable oil. Place the swordfish on the grill and brush with some of the marinade from the bowl. Grill until marked on the bottom, about 5 minutes. Flip and continue grilling until just cooked through, about 4 more minutes. Divide among plates and drizzle with olive oil. Serve with the potato salad. 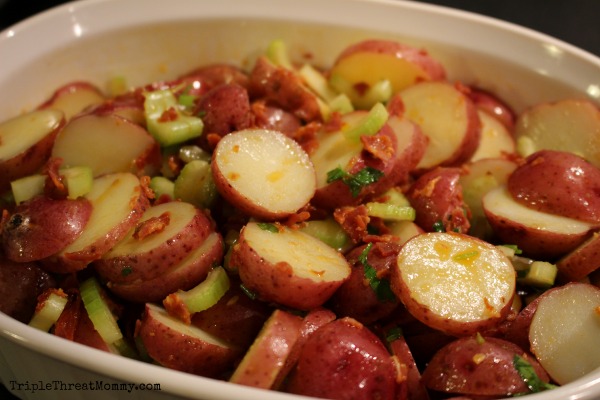 *Make sure to slice the potatoes first, then put the potatoes in a pot and cover with cold water; season with salt. Bring to a boil and cook over medium-high heat until tender, about 20 minutes; drain. Toast the cumin seeds in a medium skillet over medium heat, about1 minute; transfer to a large bowl. Add the olive oil and chorizo to the skillet and cook until the chorizo just begins to sizzle, about 3 minutes. Remove the chorizo with a slotted spoon and drain on paper towels. Remove the skillet from the heat; reserve the drippings.

Add the vinegar and herbs to the bowl with the cumin, then whisk in the chorizo drippings. Add the celery, piquillo peppers, potatoes and chorizo; toss. Season with salt and pepper.

Cook 1 1/2 cups of orzo according to package direction. Reserve at least 1/4 of the cooking water and then drain. Toss with 3 tablespoons butter, chopped chives, dill and parsley. Season with salt and pepper to taste.

I let the orzo and potato salad sit for about an 45 minutes so it was room temperature and the flavors got to co-mingle.

In hindsight, instead of making the Lemon-Herb Orzo, which was another starch. I should’ve made a vegetable salad instead. As I looked through the magazine after-the-fact, I saw a Tomato and Snowpea Salad which would have brightened up the plate. Oh well.  Bottom line is that our guests went back for seconds for all the dishes — and they stayed until way past pajama time for the kids, which means a successful dinner party, indeed!